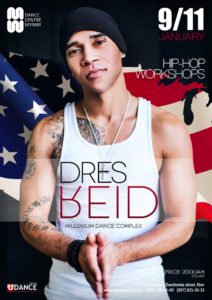 On January 9 and 11, 2016, the Kyiv modern dance school, Dance Centre Myway, hosted workshops by Dres Reid. It’s an unprecedented event for Ukraine as Dres, besides working with the brightest stars (Christina Aguilera, Chris Brown, Ricky Martin, Kelly Rowland, Janet Jackson, Jennifer Hudson and others), is one of the leading dance teachers in the most popular dancing school in the USA, the Millenium Dance Complex. Dres began dancing at 7. At 21, he moved to Los Angeles where his great dancing career started. His first contract was in 2006, a world tour with Christina Aguilera; later he would do three more tours with her. After that he started working with Ricky Martin and other stars. During his dancing career, Dres participated in 15 tours, danced in dozens of videos, hundreds of concerts and award ceremonies. Currently, he works as a choreographer for the new young performers, teaching dance classes from classics to hip-hop and keeps touring with American stars. But the main highlight of his career is definitely his cooperation with Michael Jackson who personally selected him for his last tour, This Is It. We managed to attend one of the workshops and talk a little to this wonderful talented young man.

How did you learn about the MJ audition?

I’ve been a professional dancer in LA for 12 years now, so my agent called me one day before the audition, he told me, “Hey, Michael’s having an audition”, and I said “yeah right, no way”.

You didn’t believe it?

I didn’t believe it. But he said, “There’s an audition, you have to go”. And I thought, “I’m gonna go, have fun”, because, you know, I thought this might be one of his last auditions ever because he was getting older. He may not have any other auditions, so I have to go to this one. So I went, and I had fun, a lot of fun. I do all styles, and Michael has all styles, so it was just a fit. The audition was onstage, and I’m a professional dancer, I’m used to be onstage, so everything was right for me.

Was he present at the audition?

We didn’t know. But yes, he was up there, in the high rafters, he watched the whole audition. He picked me, he said, “I like that guy in the rip-rap hat”, so that’s how I got picked.

How long did the audition last? 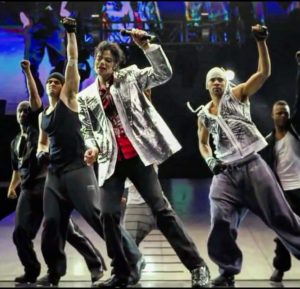 And how many people were there?

At the audition, I think there were maybe 1500 people, but altogether, with the videos, there were like 5000.

Yeah, at first they picked only 6 people, and then 4 more.

How did you meet Michael for the first time?

So he was down there?

Yes, he was down there, he said, “Hi Dres, nice to meet you, I’m glad you’re part of my family”, and I was like… AAAAA! (laughs) Okay, here’s Michael, and he said my name. 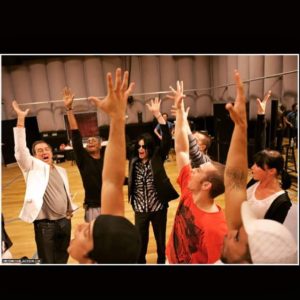 How did the first rehearsals go? How did you start learning the choreography?

We all knew the choreography, but we didn’t know the choreography. When you’ve seen it for twenty years… so, honestly, among all my jobs, this job came as the easiest. The most fun and the easiest. We learned this whole tour in, like, two weeks ‘cos we already knew most of the choreography, we were all big Michael fans. So we learned with Travis Payne, and Stacy Walker, and then Michael came. He was alone maybe for a week, and after that he was with us every day.

Did he come to the rehearsals every day?

Yeah, he was there every day.

Was it hard for you to concentrate when you got onstage with him?

God, YES! (laughs) We’d go so hard, all the way, like, oh yeah, and then we’d smell this cologne I’m wearing right now, we’d smell it in the audience and we knew that Michael was there. When you start smelling this, and the next thing you know he’s right there beside you, and… oh my God! Especially when we did the freestyling, he loved that, he loved us freestyling. So he’d be all the way in the back, and then, all of a sudden, like a ninja, he’d be onstage when the freestyle part came, like – boom! He’s there! We’d be dancing, and he’d be in our faces, like, doing this… (stomps his foot, making MJ faces) oh my God! I can’t even move right now!

So how did it feel when you got onstage with him for the first time ever?

The first one really got me, ‘cos my favorite song of all time was Beat It. And my favorite dance, too. Travis Payne and Kenny [Ortega] decided to let me be beside Michael for this one. So I’m dancing beside him, watching him, like – oh my God, I’m doing my favorite routine. They arranged it very well, they asked all of us what our favorite routines were, what our favorite songs were, they really made it their job to put us all in our favorite spot. So for Beat It and Smooth Criminal I was at the front for a lot of those songs. It was just ridiculous to watch the King in front of you, doing that… and he’s fifty years old, and he’s still getting down! I love it.

Wasn’t he saving his strength at the rehearsals?

No, he was just going. He couldn’t help it, it gave him so much energy, so whenever he was onstage he couldn’t hold back, he had to get up there and dance. 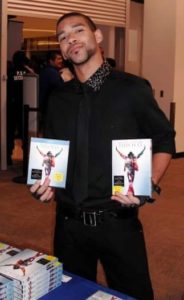 Was there actually a full dress rehearsal, the whole run of the show, or did you just rehearse separate songs?

We did the whole show the last two days before he passed. We didn’t have every costume because some of them were to be in Europe, and we had to go to Europe to get them, but we had most of them.

Can you recall any funny moment at the rehearsal when Michael was there?

One of my favorite moments is when we were doing ballet. Misha’s mother – that’s one of the dancers – was a ballet teacher, and we were doing pilates at the warm-up, so we said to him that he should bring his mother to teach us ballet, we were all friends. So she was teaching us ballet, and she’s just as crazy as anyone of us, and so it was fun to have her, she had fun with us, just being a kid. And then Michael came in these bright orange pants, you’d probably seen them in the movie, so skinny. And he comes in like a ballerina, on his toes, doing the ballet moves, and we just died laughing, we couldn’t help it, he was like – tit-tit-tit (laughs)

Okay. So you said your favorite song was Beat It, and favorite routine as well?

On that tour, my favorite was Smooth Criminal. He used only six dancers for this one, sometimes seven, but he let us give our opinions, so I said, “Hey, Michael, we have the whole stage, so how about using these six dancers and letting us come on top [of that rising platform]?” And he took my advice and did this, and it was like – that’s me, I told him to do this. So all of us had moments when we could provide our own input. It wasn’t just Michael, it wasn’t just Travis, or just Stacy, we all had input on the show, that’s why we were all so hurt when it was over, because we all got to put so much love and effort into that show.

Did he have any comments or remarks about the dances?

What did you learn from Michael and how did it help you in your career?

I learned professionalism. All the aspects. Michael wasn’t just a dancer, he wasn’t just a singer. You know, he’s actually more a dancer to me than he was a singer. He was so great at everything. He worked with the music, he was great working with Michael Bearden, great working with Kenny Ortega, Travis and the dancers – he was everywhere. So I learned how to be versatile. More versatile.

What is your fondest memory from the whole This Is It project?

His smile. He was always smiling, always L.O.V.E. It’s the one thing I miss. 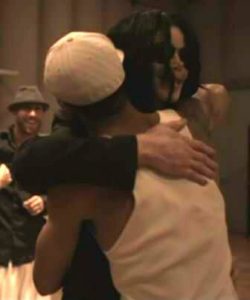 Did he do this hugging routine with you?

Oh, we all had our routines, but it was my way with people I worked with, so he started doing this with me first. Other people had their own thing, but that was me and Michael’s thing. As soon as he came to the rehearsal, I went like – “Michael!” – and ran to hug him. And so everybody would hug. And he couldn’t help it, he was just like us, he was just as excited to see us as we were excited to see him. And that’s what made him so great. He wasn’t Michael the god, he was Michael the regular person. And he was so excited to see us dancing that he acted more like a dancer, he acted like we were the stars sometimes. He treated us like stars.

Was there any song that didn’t have any choreography before, something that was new to you?

Drill, maybe. Drill was a mix between Bad and a few other songs. That wasn’t there before, Tony Testa and Travis Payne created it. What else… Every song had little pieces that we added here and there, but for the most part everything was the same. The only thing that didn’t make it into the This Is It movie was Dangerous. We did Dangerous. We already knew it, and we did it, but we never did it with Michael, so that’s why it wasn’t included.

Was it any new version of Dangerous or the same old one?

No, the same old one (shows some moves from Dangerous) I still remember everything. I don’t remember a lot from other collaborations, but I remember all the things we did with Michael.

What other performers left the deepest impression on you?

Chris Brown is my favorite. He may have a crazy personal life, and he reminds me a lot of Michael. A true dancer. He’s a performer, he sings, he acts, he does the same stuff Michael did. In my opinion, he’s the closest thing to Michael that we have now. Maybe different attitudes, but as far as the art goes, he’s very close. He studies everything, he doesn’t do just one style of dancing, he does everything.

Who else would you like to work with, in the future?

Probably, I’d just like to work with Chris again. Chris and Justin Timberlake are my other favorites.

A video from one of the Kyiv classes: